Welcome to the Yocto Project Test Environment Manual! This manual is a work in progress. The manual contains information about the testing environment used by the Yocto Project to make sure each major and minor release works as intended. All the project’s testing infrastructure and processes are publicly visible and available so that the community can see what testing is being performed, how it’s being done and the current status of the tests and the project at any given time. It is intended that Other organizations can leverage off the process and testing environment used by the Yocto Project to create their own automated, production test environment, building upon the foundations from the project core.

Currently, the Yocto Project Test Environment Manual has no projected release date. This manual is a work-in-progress and is being initially loaded with information from the README files and notes from key engineers:

The Yocto Project uses now uses standard upstream Buildbot (version 9) to drive its integration and testing. Buildbot Nine has a plug-in interface that the Yocto Project customizes using code from the yocto-autobuilder2 repository, adding its own console UI plugin. The resulting UI plug-in allows you to visualize builds in a way suited to the project’s needs.

The project uses Buildbot for historical reasons but also because many of the project developers have knowledge of python. It is possible to use the outer layers from another Continuous Integration (CI) system such as Jenkins instead of Buildbot.

The following figure shows the Yocto Project Autobuilder stack with a topology that includes a controller and a cluster of workers: 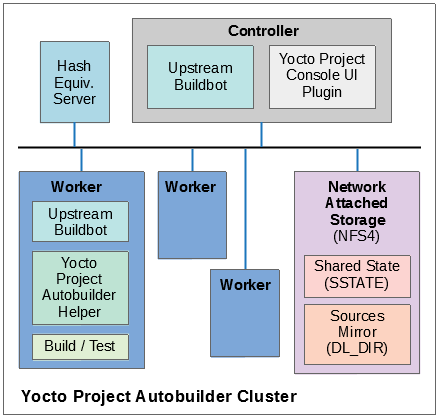 The Autobuilder tests different elements of the project by using the following types of tests:

1.4 How Tests Map to Areas of Code¶

Tests map into the codebase as follows:

This section provides example tests for each of the tests listed in the How Tests Map to Areas of Code section.

For oeqa tests, testcases for each area reside in the main test directory at meta/lib/oeqa/selftest/cases directory.

A simple test example from lib/bb/tests/data.py is:

In this example, a DataExpansions class of tests is created, derived from standard python unittest. The class has a common setUp function which is shared by all the tests in the class. A simple test is then added to test that when a variable is expanded, the correct value is found.

Bitbake selftests are straightforward python unittest. Refer to the Python unittest documentation for additional information on writing these tests at: https://docs.python.org/3/library/unittest.html.

These tests are more complex due to the setup required behind the scenes for full builds. Rather than directly using Python’s unittest, the code wraps most of the standard objects. The tests can be simple, such as testing a command from within the OE build environment using the following example:

This example, taken from meta/lib/oeqa/selftest/cases/bblayers.py, creates a testcase from the OESelftestTestCase class, derived from unittest.TestCase, which runs the bitbake-layers command and checks the output to ensure it contains something we know should be here.

The oeqa.utils.commands module contains Helpers which can assist with common tasks, including:

There is also a oeqa.utils.commands.runqemu() function for launching the runqemu command for testing things within a running, virtualized image.

You can run these tests in parallel. Parallelism works per test class, so tests within a given test class should always run in the same build, while tests in different classes or modules may be split into different builds. There is no data store available for these tests since the tests launch the bitbake command and exist outside of its context. As a result, common bitbake library functions (bb.*) are also unavailable.

These tests are run once an image is up and running, either on target hardware or under QEMU. As a result, they are assumed to be running in a target image environment, as opposed to a host build environment. A simple example from meta/lib/oeqa/runtime/cases/python.py contains the following:

In this example, the OERuntimeTestCase class wraps unittest.TestCase. Within the test, self.target represents the target system, where commands can be run on it using the run() method.

To ensure certain test or package dependencies are met, you can use the OETestDepends and OEHasPackage decorators. For example, the test in this example would only make sense if python3-core is installed in the image.

These tests are run against built extensible SDKs (eSDKs). The tests can assume that the eSDK environment has already been setup. An example from meta/lib/oeqa/sdk/cases/devtool.py contains the following:

In this example, the devtool command is tested to see whether a sample application can be built with the devtool build command within the eSDK.

These tests are run against built SDKs. The tests can assume that an SDK has already been extracted and its environment file has been sourced. A simple example from meta/lib/oeqa/sdk/cases/python2.py contains the following:

In this example, if nativesdk-python3-core has been installed into the SDK, the code runs the python3 interpreter with a basic command to check it is working correctly. The test would only run if python3 is installed in the SDK.

The performance tests usually measure how long operations take and the resource utilization as that happens. An example from meta/lib/oeqa/buildperf/test_basic.py contains the following:

This example shows how three specific parsing timings are measured, with and without various caches, to show how BitBake’s parsing performance trends over time.

When writing good tests, there are several things to keep in mind. Since things running on the Autobuilder are accessed concurrently by multiple workers, consider the following:

Running “cleanall” is not permitted.

This can delete files from DL_DIR which would potentially break other builds running in parallel. If this is required, DL_DIR must be set to an isolated directory.

Running “cleansstate” is not permitted.

This can delete files from SSTATE_DIR which would potentially break other builds running in parallel. If this is required, SSTATE_DIR must be set to an isolated directory. Alternatively, you can use the “-f” option with the bitbake command to “taint” tasks by changing the sstate checksums to ensure sstate cache items will not be reused.

Tests should not change the metadata.

This is particularly true for oe-selftests since these can run in parallel and changing metadata leads to changing checksums, which confuses BitBake while running in parallel. If this is necessary, copy layers to a temporary location and modify them. Some tests need to change metadata, such as the devtool tests. To protect the metadata from changes, set up temporary copies of that data first.