All SDKs consist of the following:

Additionally, an extensible SDK has tools that allow you to easily add new applications and libraries to an image, modify the source of an existing component, test changes on the target hardware, and easily integrate an application into the OpenEmbedded Build System.

You can use an SDK to independently develop and test code that is destined to run on some target machine. SDKs are completely self-contained. The binaries are linked against their own copy of libc, which results in no dependencies on the target system. To achieve this, the pointer to the dynamic loader is configured at install time since that path cannot be dynamically altered. This is the reason for a wrapper around the populate_sdk and populate_sdk_ext archives.

Another feature of the SDKs is that only one set of cross-compiler toolchain binaries are produced for any given architecture. This feature takes advantage of the fact that the target hardware can be passed to gcc as a set of compiler options. Those options are set up by the environment script and contained in variables such as CC and LD. This reduces the space needed for the tools. Understand, however, that every target still needs its own sysroot because those binaries are target-specific.

The SDK development environment consists of the following:

In summary, the extensible and standard SDK share many features. However, the extensible SDK has powerful development tools to help you more quickly develop applications. Following is a table that summarizes the primary differences between the standard and extensible SDK types when considering which to build:

Extensible SDK contains the toolchain and debugger if SDK_EXT_TYPE is “full” or SDK_INCLUDE_TOOLCHAIN is “1”, which is the default.

Sysroot is managed through the use of devtool. Thus, it is less likely that you will corrupt your SDK sysroot when you try to add additional libraries.

You can add runtime package management to the standard SDK but it is not supported by default.

You must build and make the shared state available to extensible SDK users for “packages” you want to enable users to install.

The Cross-Development Toolchain consists of a cross-compiler, cross-linker, and cross-debugger that are used to develop user-space applications for targeted hardware; in addition, the extensible SDK comes with built-in devtool functionality. This toolchain is created by running a SDK installer script or through a Build Directory that is based on your metadata configuration or extension for your targeted device. The cross-toolchain works with a matching target sysroot.

The native and target sysroots contain needed headers and libraries for generating binaries that run on the target architecture. The target sysroot is based on the target root filesystem image that is built by the OpenEmbedded build system and uses the same metadata configuration used to build the cross-toolchain.

The QEMU emulator allows you to simulate your hardware while running your application or image. QEMU is not part of the SDK but is automatically installed and available if you have done any one of the following:

Fundamentally, the SDK fits into the development process as follows: 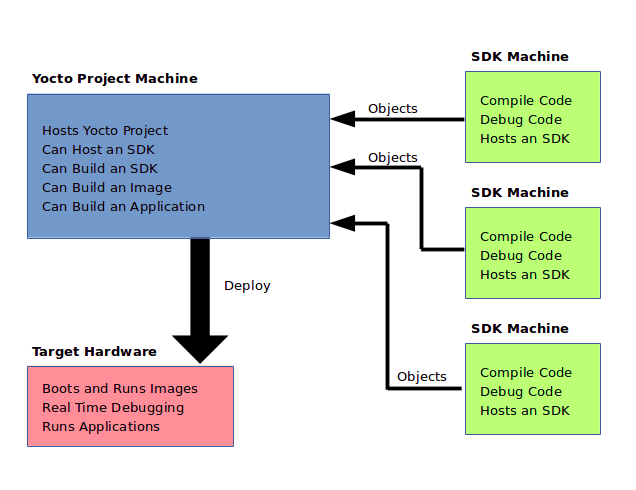 The remainder of this manual describes how to use the extensible and standard SDKs. There is also information in appendix form describing how you can build, install, and modify an SDK.