2.1 What is the Yocto Project?¶

The Yocto Project is an open source collaboration project that helps developers create custom Linux-based systems that are designed for embedded products regardless of the product’s hardware architecture. Yocto Project provides a flexible toolset and a development environment that allows embedded device developers across the world to collaborate through shared technologies, software stacks, configurations, and best practices used to create these tailored Linux images.

Thousands of developers worldwide have discovered that Yocto Project provides advantages in both systems and applications development, archival and management benefits, and customizations used for speed, footprint, and memory utilization. The project is a standard when it comes to delivering embedded software stacks. The project allows software customizations and build interchange for multiple hardware platforms as well as software stacks that can be maintained and scaled.

For further introductory information on the Yocto Project, you might be interested in this article by Drew Moseley and in this short introductory video.

The remainder of this section overviews advantages and challenges tied to the Yocto Project.

The following list describes features and advantages of the Yocto Project:

The Yocto Project’s “Layer Model” is a development model for embedded and IoT Linux creation that distinguishes the Yocto Project from other simple build systems. The Layer Model simultaneously supports collaboration and customization. Layers are repositories that contain related sets of instructions that tell the OpenEmbedded Build System what to do. You can collaborate, share, and reuse layers.

Layers can contain changes to previous instructions or settings at any time. This powerful override capability is what allows you to customize previously supplied collaborative or community layers to suit your product requirements.

You use different layers to logically separate information in your build. As an example, you could have BSP, GUI, distro configuration, middleware, or application layers. Putting your entire build into one layer limits and complicates future customization and reuse. Isolating information into layers, on the other hand, helps simplify future customizations and reuse. You might find it tempting to keep everything in one layer when working on a single project. However, the more modular your Metadata, the easier it is to cope with future changes.

To illustrate how layers are used to keep things modular, consider machine customizations. These types of customizations typically reside in a special layer, rather than a general layer, called a BSP Layer. Furthermore, the machine customizations should be isolated from recipes and Metadata that support a new GUI environment, for example. This situation gives you a couple of layers: one for the machine configurations, and one for the GUI environment. It is important to understand, however, that the BSP layer can still make machine-specific additions to recipes within the GUI environment layer without polluting the GUI layer itself with those machine-specific changes. You can accomplish this through a recipe that is a BitBake append (.bbappend) file, which is described later in this section.

The Source Directory contains both general layers and BSP layers right out of the box. You can easily identify layers that ship with a Yocto Project release in the Source Directory by their names. Layers typically have names that begin with the string meta-.

It is not a requirement that a layer name begin with the prefix meta- , but it is a commonly accepted standard in the Yocto Project community.

For example, if you were to examine the tree view of the poky repository, you will see several layers: meta, meta-skeleton, meta-selftest, meta-poky, and meta-yocto-bsp. Each of these repositories represents a distinct layer.

For procedures on how to create layers, see the “Understanding and Creating Layers” section in the Yocto Project Development Tasks Manual.

This section provides brief overviews of the components and tools associated with the Yocto Project.

The following list consists of tools that help you develop images and applications using the Yocto Project:

The following list consists of components associated with the OpenEmbedded Build System:

To use the Yocto Project tools and components, you can download (clone) Poky and use it to bootstrap your own distribution.

You can read more about Poky in the “Reference Embedded Distribution (Poky)” section.

The following lists components associated with packages for finished targets:

The Build Appliance is a virtual machine image that enables you to build and boot a custom embedded Linux image with the Yocto Project using a non-Linux development system.

Historically, the Build Appliance was the second of three methods by which you could use the Yocto Project on a system that was not native to Linux.

This section provides an introduction to the choices or development methods you have when setting up your Build Host. Depending on the your particular workflow preference and the type of operating system your Build Host runs, several choices exist that allow you to use the Yocto Project.

“Poky”, which is pronounced Pock-ee, is the name of the Yocto Project’s reference distribution or Reference OS Kit. Poky contains the OpenEmbedded Build System (BitBake and OpenEmbedded-Core (OE-Core)) as well as a set of Metadata to get you started building your own distro. In other words, Poky is a base specification of the functionality needed for a typical embedded system as well as the components from the Yocto Project that allow you to build a distribution into a usable binary image.

Poky is a combined repository of BitBake, OpenEmbedded-Core (which is found in meta), meta-poky, meta-yocto-bsp, and documentation provided all together and known to work well together. You can view these items that make up the Poky repository in the Source Repositories.

If you are interested in all the contents of the poky Git repository, see the “Top-Level Core Components” section in the Yocto Project Reference Manual.

While Poky is a “complete” distribution specification and is tested and put through QA, you cannot use it as a product “out of the box” in its current form.

To use the Yocto Project tools, you can use Git to clone (download) the Poky repository then use your local copy of the reference distribution to bootstrap your own distribution.

Much has been said about Poky being a “default configuration”. A default configuration provides a starting image footprint. You can use Poky out of the box to create an image ranging from a shell-accessible minimal image all the way up to a Linux Standard Base-compliant image that uses a GNOME Mobile and Embedded (GMAE) based reference user interface called Sato.

One of the most powerful properties of Poky is that every aspect of a build is controlled by the metadata. You can use metadata to augment these base image types by adding metadata layers that extend functionality. These layers can provide, for example, an additional software stack for an image type, add a board support package (BSP) for additional hardware, or even create a new image type.

Metadata is loosely grouped into configuration files or package recipes. A recipe is a collection of non-executable metadata used by BitBake to set variables or define additional build-time tasks. A recipe contains fields such as the recipe description, the recipe version, the license of the package and the upstream source repository. A recipe might also indicate that the build process uses autotools, make, distutils or any other build process, in which case the basic functionality can be defined by the classes it inherits from the OE-Core layer’s class definitions in ./meta/classes. Within a recipe you can also define additional tasks as well as task prerequisites. Recipe syntax through BitBake also supports both _prepend and _append operators as a method of extending task functionality. These operators inject code into the beginning or end of a task. For information on these BitBake operators, see the “Appending and Prepending (Override Style Syntax)” section in the BitBake User’s Manual.

The OpenEmbedded Build System uses a “workflow” to accomplish image and SDK generation. The following figure overviews that workflow: 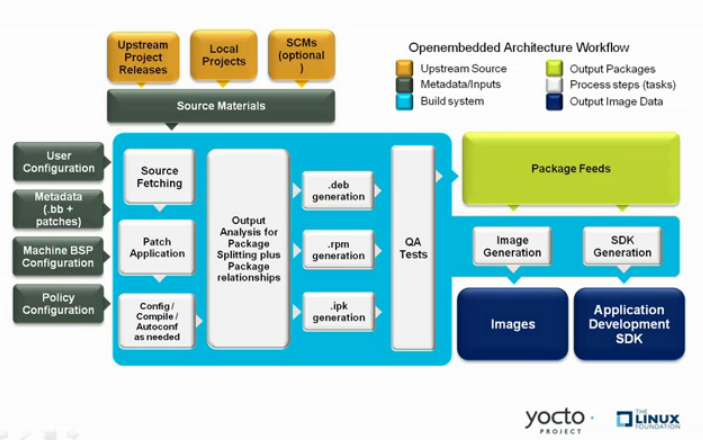 Following is a brief summary of the “workflow”:

For a very detailed look at this workflow, see the “OpenEmbedded Build System Concepts” section.

It helps to understand some basic fundamental terms when learning the Yocto Project. Although a list of terms exists in the “Yocto Project Terms” section of the Yocto Project Reference Manual, this section provides the definitions of some terms helpful for getting started: